To view and download photos from the awards presentation, please visit: https://tiasafety.us/2019-transportation-safety-awards/ 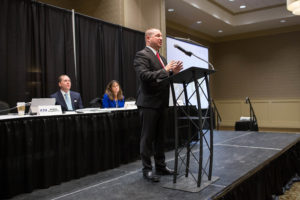 NOVI, Michigan, November 7, 2019 – The Transportation Improvement Association (TIA) presented transportation safety awards during its 2019 Annual Meeting and Law Enforcement Appreciation Breakfast at the Suburban Collection Showplace on Monday. The awards honored individuals and an agency for making a tremendous impact on improving transportation safety through engineering, education, and enforcement.

“Congratulations to the award recipients for their leadership in creating a safer transportation system,” said Jim Santilli, CEO of TIA.  “They are true heroes.  I commend them for going above and beyond to save lives and prevent injuries.”

The following individuals and agency were recognized:

White Lake Township is approximately 34 square miles and has a population of more than 31,000.  The agency, which is led by Chief Dan Keller, participated in the 2019 Oakland County Traffic Enforcement Grant provided by the Michigan Office of Highway Safety Planning and administered by TIA.  Their crashes were reduced by 10% from 2017 to 2018.  During 2019, they worked 382 grant hours. Those traffic enforcement hours resulted in 439 traffic stops, which included 32 drunk or drugged driving arrests, 127 moving violations, 121 non-moving violations, 37 misdemeanor arrests, and 5 felony arrests.  The White Lake Township Police Department changed driver behavior by being visible and providing aggressive traffic enforcement, thus enhancing the safety of those who utilize their roadways.

Dennis Kolar has more than 32 years of experience in the road business, including more than 26 years with the Road Commission for Oakland County.  He was appointed managing director effective January 2, 2012, by the Board of Road Commissioners.

Previously, he served as deputy managing director/county highway engineer since 2005 after having held a variety of other executive-level positions with the agency.

Prior to joining RCOC, Kolar worked for the Michigan Department of Transportation (MDOT).

Kolar has consistently upheld traffic safety as a top priority, which has helped Oakland County achieve one of the lowest traffic crash fatality rates in the world. In 2018, Oakland County’s fatality rate was 0.41 deaths per 100 million vehicle miles of travel.  During that same year, the nation’s rate was 1.14 and Michigan’s was 0.95.  Kolar continues to go above and beyond to participate in traffic safety initiatives, implement effective road safety enhancements, and provide resources.

Sheriff Anthony Wickersham began his career at the Macomb County Sheriff’s Office in 1986.  Throughout the years, he served in every rank of the department until he was appointed to his current position as Sheriff in 2011.

Upon his appointment, Sheriff Wickersham made traffic safety a top priority at the Macomb County Sheriff’s Office.  Despite his busy schedule, he frequently speaks at schools and other events, supports traffic enforcement initiatives, and goes above and beyond to make himself available and assist whenever needed.  After the tragic death of a Romeo High School student, Ally Zimmerman, Sheriff Wickersham helped develop the “Remembering Ally: Distracted Driving Awareness Campaign.”  He was also the first law enforcement leader to agree to participate in Operation Ghost Rider, which is a very successful distracted driving enforcement initiative that TIA has shared at the national level.

On June 18, 2014, Jacob Freybler was tragically killed in a car crash in west Michigan, which resulted from distracted driving.  Founded by Jacob’s parents to honor Jacob’s legacy, and help others as Jacob aspired to do by becoming a firefighter, the mission of “Stay Alive, Don’t Text and Drive” is to end distracted driving.

Since its formation, the Freybler’s have spoken to more than 100,000 students throughout Michigan and northern Ohio.  Furthermore, they routinely speak at driver’s education schools.

During 2017, Jim and Diane became active supporters of the Hands-Free Michigan campaign TIA announced during early 2016.  They continue to speak at press conferences, contact elected officials, and promote the legislation that is designed to end distracted driving.

As a 16-year-old award-winning performer, Ally Zimmerman loved giving back to others.  She had dreams of changing the world.  On December 28, 2010, Ally was an innocent passenger in a vehicle that was struck by a distracted driver.  She died from her injuries on January 5, 2011.

Ally’s mother, Laurel Zimmerman, immediately partnered with TIA, and numerous public safety agencies and corporations, to create the “Remembering Ally: Distracted Driving Awareness Campaign.”  The campaign featured distracted driving awareness posters, wristbands, a 30-second television public service announcement, a resource DVD, and a realistic distracted driving crash education video.  The crash video, which was filmed in Macomb County during December of 2011, received an Eclipse Award for production excellence and has been viewed in more than 90 countries.  Zimmerman frequently travels to schools throughout Michigan to share her story.  Ultimately, more than 1 million people have been educated as a result of the “Remembering Ally: Distracted Driving Awareness Campaign.”  The campaign was one of five traffic safety programs in the nation to receive a Peter K. O’Rourke Award during 2013.  It also received a 2012 Outstanding Traffic Safety Achievement Award from the Michigan Governor’s Traffic Safety Advisory Commission.