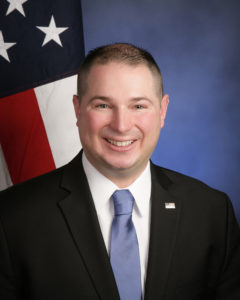 Jim Santilli has more than 21 years of transportation safety experience and began his career with the Transportation Improvement Association (TIA) on May 15, 2006.  After serving as a Traffic Safety Specialist from 2006 to 2009, and Coordinator of Information Technology, Public Relations, and Traffic Safety Services from 2009 to 2011, Santilli was asked to lead the agency during January of 2011.  He was officially appointed to the position of Chief Executive Officer by the Board of Directors on June 24, 2011, and is the 4th leader in the 55-year history of the agency.  Previously, Santilli worked in the criminal justice and public safety fields.

Under Santilli’s leadership, TIA reinvigorated a culture known for high employee engagement, fiscal responsibility, and award-winning safety initiatives. Since 2011, TIA significantly improved its financial position by eliminating all debt during FY 2012, establishing the first reserve fund for emergency situations, and achieving a more than 1,009% increase in net assets by the end of FY 2016. Services and staffing were also significantly enhanced and expanded.

As a leader in distracted driving awareness, Santilli led the development of the “Remembering Ally: Distracted Driving Awareness Campaign,” which was named after a 16-year-old Romeo High School student (Ally Zimmerman) who was hit by a distracted driver in 2010.  She later died from her injuries.  The campaign, a joint effort between Ally’s family, friends, and numerous government agencies and businesses, was one of five traffic safety programs in the nation to receive a Peter K. O’Rourke Award during 2013.  It also received a 2012 Outstanding Traffic Safety Achievement Award from the Michigan Governor’s Traffic Safety Advisory Commission.  A component of the campaign, a realistic distracted driving crash education video, received an Eclipse Award for production excellence and has been viewed in more than 90 countries.  Since 2010, Santilli has been speaking about the dangers of distracted driving and promoting increased enforcement.  Most recently, Santilli conducted extensive research and provided State Representative Martin Howrylak with language for a hands-free distracted driving bill that was introduced in the Michigan Legislature during 2016 (HB 5867) and 2017 (HB 4466).  State Senator Ruth Johnson used the language to introduce SB 288 during 2019 and SB 409 during 2021.  Furthermore, he organized an enforcement initiative known as “Operation Ghost Rider,” which was featured nationally in The Wall Street Journal and at the 2019 Governor’s Highway Safety Association’s Annual Meeting in Anaheim, California.

Santilli holds an Airman Certificate from the Federal Aviation Administration (FAA) with a small Unmanned Aircraft System (sUAS) rating, and has more than 7 years of experience flying sUAS’.  He previously served on the Michigan Aeronautics Commissions’ Unmanned Aircraft Systems (UAS) Advisory Committee.  Since mid-2018, Santilli has trained hundreds of professionals from more than 100 agencies (federal, state, county, local, tribal, and college/university) and companies in Alabama, Florida, Michigan, and Ohio.  He has partnered with the FAA to educate law enforcement leaders on sUAS regulations and responses to a variety of situations, and flown a number of public safety missions.  Most recently, Santilli spent several days searching for victims after Hurricane Ian.  As a former member of a law enforcement aviation unit, Santilli became the department’s first licensed sUAS pilot on July 26, 2017, and wrote the Standard Operating Procedures and provided guidance for the new Unmanned Aerial Vehicle (UAV) Unit.

Santilli served as an Ambassador at Detroit Metro Airport from 2014 to 2015 and 2018 to 2020.  He was the recipient of Oakland County Executive L. Brooks Patterson’s prestigious ‘Elite 40 Under 40’ leadership award during 2012.

A lifelong resident of Michigan, Santilli is a graduate of Dakota High School and Ferris State University.  At FSU, he earned a Bachelor of Science in Criminal Justice, received the Torchbearer Leadership Award, and an award from the Department of Public Safety.  He has training in aeronautics, corporate law, emergency medical services, highway safety, and homeland security.

Santilli frequently shares information with other professionals throughout the nation and internationally to remain on the cutting edge in transportation safety.

Santilli and his wife reside in southeast Michigan.  Both enjoy spending time with family, traveling, and helping the community.  They have one son.